My Surprise PR at the Cowtown Half Marathon

On the Thursday before the Cowtown half marathon my ankle started feeling weird. I didn't recall anything specific that would have caused this pain, so I just wrapped it up and hoped for the best.

I've been officially training for Cowtown since the beginning of the year. I was on a short cycle of just eight weeks, so I didn't have a lot of time to ramp up the miles and work on speed. I had a solid running base under my belt, but I didn't have high expectations for my finishing time.

Last week I wrote a post about my training road to Cowtown. This is the first year I ran the big race in my own city of Fort Worth and I now I wonder what took me so long. This was the most well-organized race I've ever run. Free parking was ample (even when you showed up at the last minute, like I did). The location was convenient and accessible. The race SWAG was fun and abundant. Seriously, who gets two shirts, a jacket, a head wrap and a medal? The corrals were well-thought out and organized. Even the weather was perfect on Sunday (sorry to the 5K and 10K runners on Saturday who got soaked in the pouring rain).

Even with a sore foot, I felt ready for the race. More ready than usual. I was actually scared that I was feeling too confident as if somehow that would jinx the whole thing. Stupid runners superstition.

I found a cute running skirt hiding in my drawer that still had the tags on it. It was supposed to be a little chilly in the morning, but I knew once I started running it would be perfect. I wore a tank with a lightweight jacket and took my traditional "Flat Lea" like any good runner on Instagram does.


I set the alarm for 5:30 am to prepare for a 7am race start. I woke up with a new soreness on the outside of my foot. What the heck is going on? It didn't hurt inside my cushioned running shoes, but I was a little worried about it.

I ate my long run and race day tradition of toaster waffles with berries, syrup and a banana. I hit the road while it was still dark to head south to Fort Worth.

I won't bore you with my mile by mile commentary, but I broke the ultimate racing rule and did something brand new on race day. (Do as I say not as I do: Never wear, eat or try anything new on race day.) I set my TomTom Spark GPS watch to alert me if I was running faster than a nine minute mile pace or slower than a 9:30 pace. I thought this was a safe pace as to not kill myself but still be in range to get a PR. I didn't have time to do any runs with this new setting so I was annoyed to realize it changed the main screen settings so I couldn't see at a glance how much time has passed or my average pace. It only showed me current pace and whether I was on target or not. (There may be settings I was unaware of to fix this, but I didn't realize until I started running, so it was too late.)

The only times my watch told me speed up was during the first mile when it was crowded and during mile nine on the killer 1/3 mile hill across the bridge back into downtown Fort Worth. The rest of the race it was telling me to slow down, which I happily obliged.

I couldn't believe how quickly the miles were whipping by. I felt great the entire race. My music was pumping in my ears and my legs were grooving along. After mile six, it seemed like I was steadily moving between 9 and 9:10 (but I couldn't be sure). I started to get the idea that I could maybe set a new personal record for this race, but I didn't want to get my hopes up.

During the race I never knew my average pace or the amount of time that passed. I don't know if this mentally helped me or hurt me. I just decided to keep moving forward at this comfortable-ish pace, not pushing any faster...until I hit mile twelve. I decided to push it on the last mile just in case I was close to a PR. That 1.1 mile was the only time I suffered the whole race. I found it funny when I looked at my splits after the race. That final mile wasn't faster than my previous few miles. It just goes to show, it's all in our heads.

When I looked at my final stats on my GPS watch after crossing the finish line, It said 1:59:00 couldn't believe I hit a new PR! I was on cloud nine! I would like to thank strength training, the run streak and early morning race day waffles.

After the race I ran into some social media friends! 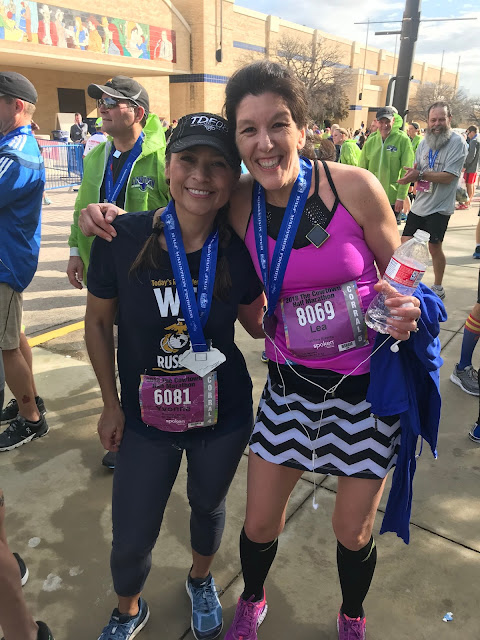 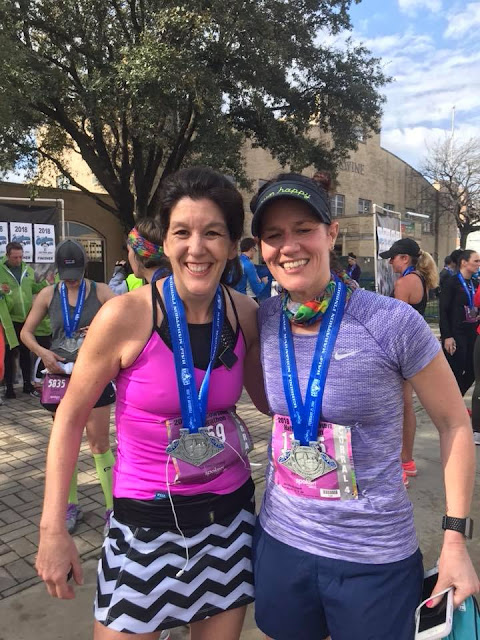 When I got home, hubby got me PR flowers. Cue internet "awwww" 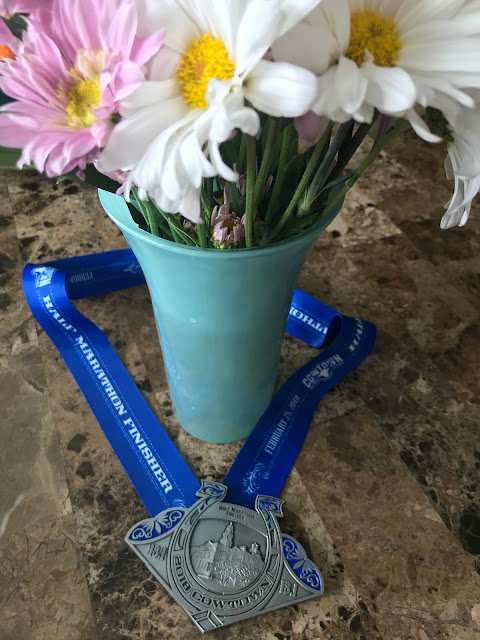 Did I just achieve a half marathon PR on a bad ankle? I've been icing, elevating and compressing since the race. Hopefully I'll be back to normal again soon after a few recovery and rest days. Now I feel the like the sky's the limit if I have a longer training cycle that includes some speed work. My glory days are still here. Except...

As I was walking back to my car after the race, I reached back to smooth my skirt and it was tucked into the shorts in the back. Was it like that since my porta-potty stop at 6:45am? If so, I deeply apologize to all the runners behind me.


My official race photo. I paid $30 for this sucker, so I thought I would share! 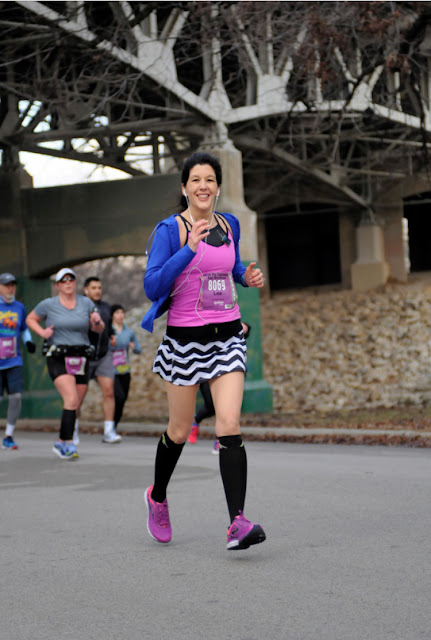