The Dallas Marathon and Second Chances

Last year I had an incredible blogging opportunity with the metro PCS Dallas Marathon. Through a PR agency, I agreed to work with metro PCS to blog about the Dallas marathon and metro PCS, and in exchange they paid my entry fee (and paid for a free phone & service for six months). Shortly after I was reimbursed for the entry fee, I received an email from the PR agency that there were some internal changes at Metro PCS and they were not moving forward with the blogger program. Sorry, no free phone offer, no blog post posts are required, but enjoy your free entry. I wasn’t too upset about this because in the end, I didn’t have to write a single post and my entry fee for the marathon was paid.

At that point, I was not at all ready to run a marathon, but I had plenty of time to train. I’d been on a sort of running hiatus, but felt training for a marathon would be just what I needed in order to bring my motivation back on the upswing. I joined a marathon training group and I was ready to go. But then one thing led to another and I developed some sort of exercise-induced asthma where I would produce large amount of phlegm when I would exert myself. It was so bad that would have to stop running to gag it up. As frustrating as this was, I decided to not let it stop me. I figured if I have to stop and cough, I’ll do that, but I’ll keep going.

Then, for the first time ever in my running life, I started to feel pain when I ran. My hip flexors were always hurting, my hip, my shins, and sometimes my knee. Ugh, I wanted to blame old age on my newly developed aches and pains, but I really knew it was because I hadn’t been running as much, and I probably was just pushing my mileage more than I should have been, just starting up again. Between my pains, my coughing, and the hot Texas summers, at some point I just gave up. Quietly. I barely even let myself think about it, because I felt pretty bad for quitting. But I just tried to put it out of my mind and moved on. At least I didn’t waste $100 on an entry fee, I told myself.

Then when the time for the Dallas marathon arrived, Dallas got hit with a terrible ice storm and the marathon was cancelled. Cancelled! I couldn't even believe they could do that. I understand safety concerns, but the race was non-refundable and forget the money, we all know you can't refund six months of 4:30am training runs. I felt just horrible for all the people that actually put in all that work, trained for months, in order to have the big pay off get cancelled. Totally heart-breaking.

But the unfortunate situation presented me with a second chance. The Dallas Marathon was offering discount rates for the 2014 marathon to the people who weren’t given the opportunity to run it in 2013 because of the ice storm. (I personally think it should be free, but that is a whole other blog post). But I qualify for the discounted rate because I was registered in 2013. I was given a second chance to run my first full marathon. 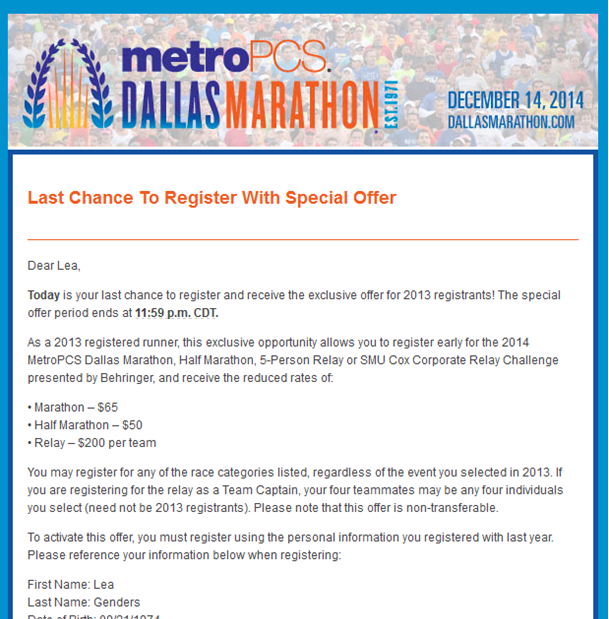 The problem? The deadline to register at the reduced rates is today. TODAY! Like in 3 hours. I could register for the full marathon (and I'd have plenty of time to train), but what if I can't handle it? I've been struggling with shin pain again (ugh) and can barely run a 5K without pain. Maybe I should just register for the half. I've ran enough halves in my life, that I feel like it is an attainable goal, then maybe plan to run the Cowtown full marathon in February of 2015 after I get another half under my belt?

I have no idea what I am going to do in the next few hours.

Posted by Unknown
Email ThisBlogThis!Share to TwitterShare to FacebookShare to Pinterest
Labels: Half Marathon, marathon, running