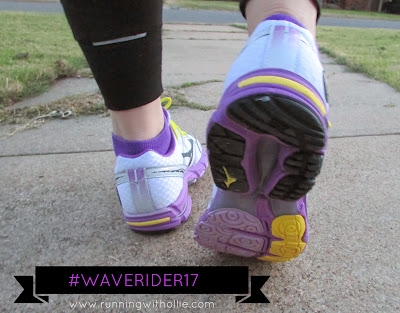 Happy Thanksgiving! Ollie and I attempted to run a Fort Worth turkey trot 5k this morning but had too much fun and got in so much trouble. Well, one of us got in trouble. You can guess who.

Bringing Ollie to the turkey trot was probably the worst idea ever. It was all so overwhelming for him. He was having fun, running around on his leash, and his tail was wagging at warp speed. He seemed so happy. At first, I tried to keep him in an area of the park where there weren't as many people so he could adjust to his new surroundings while we waited for the race to start. When they announced the 10 minute warning, I began walking with him towards the start line. He'd bark at another dog, or pull on his leash a little, but I was keeping him under control until he spotted his apparent archenemy, the Great Dane. He broke through all the holds on his leash, and when I grabbed him by the collar to try to stop him, he kept going and literally dragged me off my feet, through the mud, ripping off my race bib in the process. I didn't let go. I couldn't! The jaws dropped of the people around me. I stood up from my mud slide looking more like I was running a mud run than a turkey trot! The cool and collected Great Dane just walked away, but it soon became apparent that if I didn't get him out of there Ollie would try to take vengeance on his nemesis. I couldn't do this for 3.1 miles. I was so disappointed that I didn't get to run the turkey trot this year, but ultimately I decided to just be thankful that I was dragged through the mud and not on the concrete.

The turkey trot was supposed to be my first opportunity to break in and test run (pun entirely intended) my new Mizuno Wave Rider 17 running shoes. Since I didn't get to run the turkey trot I came home and pounded out a 5k in my neighborhood. There was no shiny turkey medal at the end, but I got it done, and despite the fact that they were now covered in mud, I loved the Wave Rider 17.

Mizuno is sponsoring this post, but all the gushing is purely my own. The first time I ever got professionally fitted for a shoe in a running store, they fit me for a neutral Mizuno shoe and I've been hooked on Mizunos ever since. Since I am already a huge fan, it seemed like the perfect fit for me to talk to you about their new shoe, the Wave Rider 17 which will be released on December 5th. 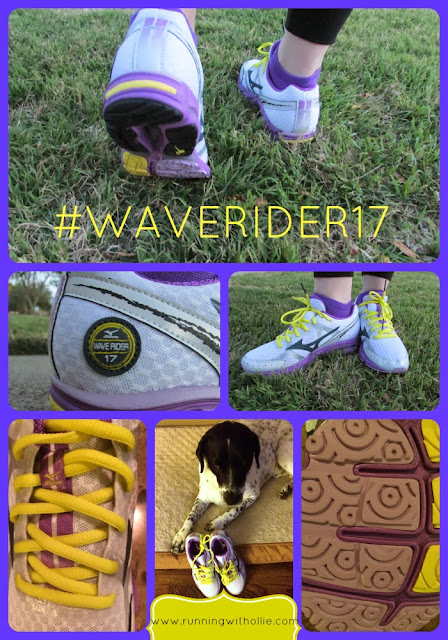 I love that they are so light weight but still have support and cushioning. I never could wear those barefoot running shoes, because I ended up needing more support (I tried). The Wave Rider 17 is the best of both worlds, so light that you don't even feel them, but with the support I still need. The shoe is light and flexible, which allows you to sense the ground beneath you, which I think aids in better running form. It flexes with the natural shape and movement of your foot as you run. It is the kind of shoe that you hardly know it's there and allows you to get lost in your run.

It wasn't at the turkey trot, but I did end up having a brilliant run. The crisp cool November air and the quiet neighborhood provided the perfect backdrop for reflecting on all the things I am thankful for in life, including my feisty dog. After a brilliant run, now we're ready to eat some turkey and celebrate our brilliant life with family. 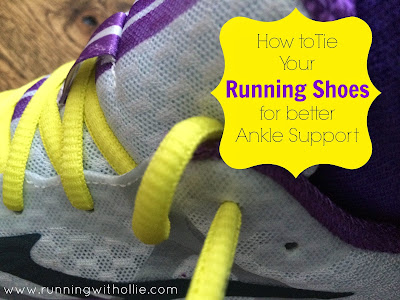 While I had my new fancy Wave Rider 17 shoes out, I thought I would show you a technique I learned about how to tie your running shoe laces for better ankle support. I've been tying my laces this way for years and it really makes a huge difference!

Huge thanks to Hubby for being my videographer, photographer, and general blog assistant. I wonder how anyone runs a blog without a supportive husband! Who else would make funny turkey sound effects at the end of my video? Please check out my one minute video on how to tie your running shoes for better ankle support demonstrated on my new Mizuno Wave Rider 17 running shoes. I could post a whole other blog with the hilarious outtakes. Click the arrow to start the video.

Thanks so much to Mizuno and Fitfluential for the opportunity to review the Wave Rider 17. It's just one more thing to be thankful for this holiday.

The Mizuno Wave Rider 17 will released to the public on December 5th, just in time to surprise your favorite runner with the perfect Christmas gift.


Did you run a turkey trot this year?
Ever run one with your dog?
Are you planning on checking out the Mizuno Wave Rider 17?