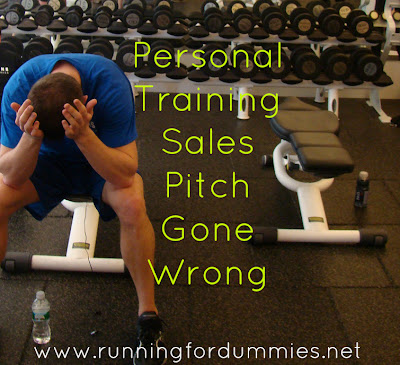 In my fitness experience, I kind of feel like I have done it all; group fitness classes, boot camps, Crossfit, running, races, DVDs, weights, Yoga, and almost everything in between.  One thing that I have never done is work out one-on-one with a personal trainer.  Seeing how I have this (seemingly far away) dream of becoming a personal trainer, I thought it might be a good idea to explore this idea.  My motivation has been on a down swing and I thought it would be a good idea to work with a trainer for the motivation and as a learning experience.

With the onset of the winter months, I recently signed up for a no contract membership again at LA fitness in Hurst. This will allow me to get in some early morning runs and weight lifting sessions, sheltered from the cold and dark. When you sign up at LA Fitness they offer you what they call a "Free Personal Training Session."

At first, I told the guy selling me the gym membership that I wasn't interested in the session as it was really nothing more than a sales call. They work out with you for a few minutes, try to convince you that you know nothing and can't possibly be successful without them, and the high pressure sales begin. Although I did want to talk to someone about personal training sessions, I was not interested in being a victim of the dreaded "sales call."

While he wouldn't admit that this was only a sales call, he said that there was some selling at these sessions, but he promised to set me up with one of the more laid-back low pressure guys, one of the guys who really would just be interested in answering my questions and helping me decided if it was right for me. I reluctantly agreed to the appointment.

"Can we do an early morning appointment, say 5:30 am?" I asked
"Sorry, the trainers only work between 8am-7pm" he responded.
"That's odd, I'm sure I have seen trainers here at 5:30 am" I argued.
"Well the sales trainers only work from 8-7, the actual trainers work all hours," he was forced to admit. 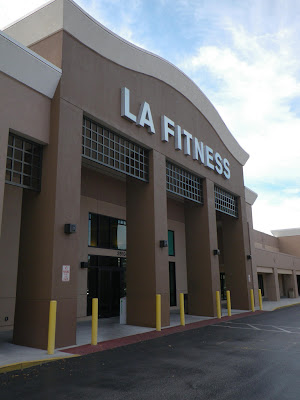 I show up in the gym in my shorts and tank in December, the gym was chilly in anticipation of the hard work outs ahead. I met with my salesman/trainer who greeted me with a white smile and a clip board. His sandy blond hair is spiked gently to suggest that he has a wild side, while still remaining professional in his crisp polo shirt. He is friendly in the way I have come to expect of a salesman, he laughs a little too hard at my jokes, he's just a little too enthusiastic towards my responses to his questions. He seems nice enough, but there is a quality that is not at all authentic. I sense, and probably rightly so, that he is feeding me the sales pitch and that he is following along to a script in his head.

He handed me a business card that had his picture on it, presumably from a body building competition. I look at it and had to hold in my laugh, I was kind of embarrassed for him. I couldn't believe he was handing this thing out, way over exposed.

He kept saying, "Keep doing what you are doing and you may get a skinnier body, but your body composition will stay the same." I had to remind him several times that one, I was not interested in a skinnier body (thank-you-very-much), and  two, I have already been working out with weights for a couple of years. I was not looking for a trainer to do something completely new, I needed the motivation and extra push. Of course there is always a lot to learn and I would look to a trainer to guide me to the next step, but I am generally well educated about body compensation and a weight work out has been a regular part of my routine for years. It was almost like this pitch was so ingrained in his brain, he couldn't change it even when it didn't apply to the client.

I had to say more than once, "You are not listening to me."

He said more than once, "You are not obese," in a condescending way, as to say, you are not fat, but you have a lot of work to do. More than once.

Yeah, thanks buddy. I didn't think I was.

He also called me a variety of nick-names, which I am never too keen on: honey, sweetie and the worst of all, baby. He also forgot my name more than once and had to ask me to remind him. Maybe his bad memory was the reason for his over-use of the sort of nick names that are only acceptable to me coming from my hubby's lips.

The last thing that rubbed me the wrong way was that he did not like that I was a runner and he didn't hesitate to tell me so. He also shook his head in disapproval when I told him about my experience in boot camps, with Insanity, and in Crossfit.  I really don't appreciate anyone saying that there is only one way to fitness. I really didn't appreciate his negative remarks towards my passion for running.

I think any good trainer should encourage people to approach fitness in whatever way they enjoy most. While I understand he is selling personal training sessions, so it is in his best interest to down play other forms of fitness, it is no excuse for this behavior. How dare he suggest that running was bad or wrong?

I say, whatever you love to do for fitness, that is what you should do. Besides I wasn't there for running tips, I was there to work out with a trainer with weights, so it was already clear that I wasn't on a one-track fitness regimen of running only.  He even went on to suggest that during a squat that I was beginning to develop arthritis in my knee. I asked him how he couldn't possibly know that from watching a single squat and he responded, I just know because you are a runner and that is what eventually happens to all runners over time(?!?).

I was not liking this guy. If I thought for one second that he would be the guy doing the training sessions, I would have ran out of there.

Quite honestly, I was annoyed, but I was not so offended that I was ready to walk out, especially since I knew he wouldn't be the one doing the training sessions. I have come to expect that these are the behaviors of a salesman in this type of business.  Even though I disliked him, I generally liked what he had to offer, it seemed like a pretty good deal, maybe even whip me into shape. I'm thinking I will sign the papers despite the salesman, not because of him with the hopes of a trainer with a better personality.

It would have been a much better experience if I could have approached the front desk clerk and asked for their rates and signed the paper, why they make you go through the painful sales call, I will never know.  Does this crap work on anyone? Do people fall for this?

Then he slides the paper under my pen, "Sign here," he urges, probably quite proud of himself, thinking he made the sale, if he only knew what I really thought. He tries to hide that he is annoyed that I am taking the time to read the contract, rather than sign and read later (or never) like so many people do, but I can sense his impatience.

Now I am completely hesitant to do something that I really wanted to do, work out with a trainer.  I am completely beat down by the experience.  I walked out of there without signing the contract. He ultimately sold me on not buying training sessions.

What do you think of high pressure sales? My husbands runs a small local security alarm business in DFW, so it is necessary for him to give a sales pitch of his products and services to his customers. I think he is the best salesperson, because he says something like, "I am a terrible sales person, I am just here to show you what is available to you and help you make the best choice for you." This is the best "pitch" because it makes people feel at ease, and he really does have their best interests in mind.  I wished my gym salesman had this honest consultative sales approach.

Does a salesman's tactics ever have a reverse effect on you?  Do you they cause you to not want to buy something that you originally wanted to buy?  What is your experience with gym membership and personal training sales sessions?