HAPPY BLOGIVERSARY TO ME 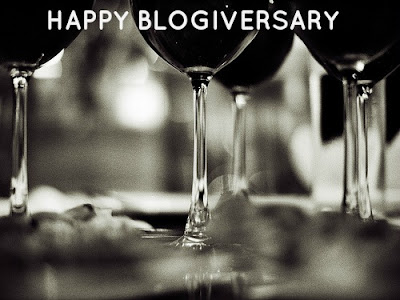 November is my official Running for Dummies Blogiversary! I can't believe it has been well more than 105,000 page views and a whole year since I started this blog.  I created this blog in November and then in December of last year, I wrote my first official Running for Dummies post, begging for followers.  In truth, I have had this blog since 2009, but it has went through several transformations until it became the blog you read today.  In fact, before I even had an official blog, I used to blog over on MySpace.  Remember MySpace?  I technically still have a MySpace account so I dug around over there for a blast from the past.  You should read this MySpace blog post, it is pretty funny, if I do say so myself.

Even though I have always enjoyed writing, the first time I ever started a blog, it was simply to share pictures with my friends and family.  I have been doing a "Year in Pictures" blog post at the end of each year since 2008, which at the time my blog was simply called 'Lea Genders' (that's me).  I didn't have a particular theme or blog schedule, like I do today.  I simply wrote when the feeling struck me. Sometimes it was just once a month, sometimes less.  My readers were mainly just my friends and family.  Over time, my blog topics gravitated towards concerts, music, and my musician obsession hero, Jack White.  I eventually changed the name of the blog, to "Fell in Love with a Band, " which is a play on words of the White Stripes song "Fell in Love with a Girl."  I started to gain some followers outside of my bloodline, people who like me, were big fans of Jack White.

While my blog was rock music and concert centered, I still used this outlet to write about other things occasionally.  When I would race, I would share my race recaps.  Before long, the fitness themed blogs started to eclipse the music themed ones.  I was pretty sure that the people following my Jack White blog, could care less about my latest PR, so at the end of last year I decided to separate the two blogs.  I kept the 'Fell in Love with a Band' blog, but started this new blog, 'Running for Dummies', that would be more running and fitness focused.  I moved all the non-musical related posts over to the new blog and that is when Running for Dummies was officially born.

Even after Running for Dummies was created, my posts were still on a whenever-the-feeling-struck-me type of schedule.  It wasn't until I became a Fitfluential Ambassador this Spring that I really started to focus on my blog as a priority and a responsibility.  Now, instead of only writing when I felt inspired, I was sitting down to plan posts, brainstorm ideas, and really trying to grow my blog.  Now, when I waste spend hours on Twitter, Facebook or Pinterest, I can tell my husband, "I'm working!" In the past six months this blog has grown leaps and bounds! I am thankful to the Fitfluential community for the opportunities, inspiration, support, and learning experiences, I couldn't have gotten this far without you.

I wanted to take this opportunity to thank you for hanging in there with me.  Your comments, questions and posts here on my blog and on the Running for Dummies Facebook page inspires me more than you will ever know.  Thanks to you that have jumped on board over this last year, I hope you hang with me for many more.

If you are not following me yet, anyone with a Google account can follow this blog with Google Friend Connect (on my right side bar). Don't make me beg (again).  There is no obligation to actually read it.

If you want to check out my music blog, you can click on the link.  Jack needs to come back to Dallas so that I have something to write about on that blog.