For a minute there, I thought I was having a fitness identity crisis.  I identify myself as a runner.  I am a runner.  I love running.  I love racing.  My blog is called RUNNING for dummies.  This is what I do. This is what I love.  Except I haven’t been running much at all lately.  I've been averaging 10 miles a week.  The old me would scoff those miles, the old me ran 10 miles a day! 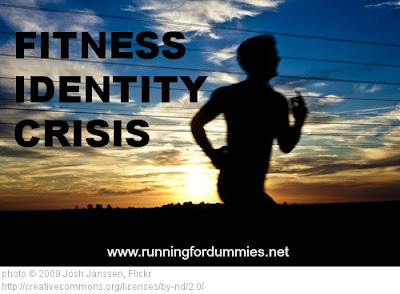 I've been running for about 10 years.  I came to the realization about two years ago (I’m a slow learner) that in order to become a better runner, I needed to get stronger.  I joined a boot camp and started doing some strength training.  I would do boot camp several days a week, then run several days a week, still focusing on putting in as many miles as possible.  This went on for a year or so (on and off) until the beginning of this year when I decided to start a more serious weight lifting program.  Boot camp was great and brought me far, but it was time for the next level.  It was time to say good-bye to the 8-10 lbs. weights at boot camp and start to lift heavy on my own to get stronger!  Over the next 12 weeks, I lifted heavier, ran less, got much stronger, and to my surprise, became a much faster runner.  I lifted weights 3-4 days a week and ran 3-4 days a week (doubling up some days).  I liked weight lifting much more that I thought that I would, but after several months of the same routine, I started to get bored.  I progressed to the point where I couldn't advance to the next level without some professional help.  No, not from a psychiatrist silly, from a personal trainer.  I wasn't interested in getting injured, and I didn't have the comfort level to go there alone.

After about six months, I started to lose my motivation to get up at 5am to hit the weights.  I was missing more and more of those morning work outs.  I knew it was time for a change, but what now?  I knew strength training was important, I knew that (just) running alone would never be enough anymore.  I was proud of the muscle (abs, hello!) and the speed that I gained and I wasn't willing to lose them.  This is when I decided to do Insanity.

Insanity was the first program that I ever did where I wasn't able to incorporate running into my routine.  Insanity was a 6 day a week program and was pretty intense.  I was committed to following the schedule to the letter.  During the first month, when the work-outs were easier (easier. Ha!) and shorter, I would get in about 2 runs in a week, but once I moved into the second month’s longer and more intense work outs, I was lucky to run once a week.  I missed running but I knew this was only a nine week program.  It was OK to take a temporary break.

Insanity, without a doubt, made me stronger.  Much Stronger.  The proof is in my before and after fit tests.  But interestingly, my running pace slowed slightly (15-30 seconds a mile).  I guess if you want to be a good runner, you have to actually run!   I finished up Insanity and was so proud of myself!  It was really hard and I saw it through to the end, but I was ready to start running again.

What was next?  My fitness style is that I have to be involved in a program or I have trouble with commitment.  I have to have a written schedule for a set amount of time and follow it to the letter.  I can’t just decide on a whim every day what I will do, or frankly I will probably end up doing nothing.  Maybe I should repeat Insanity?  Yes, that is what I would do.  I talked about it online.  I even did the first two work-outs.  Wait, no, maybe I should try P90X instead.  Yes!  Rather than repeat what was known (Insanity), I would venture into the unknown with P90X.

Last Sunday night I planned to start P90X on Monday morning, but then I stayed up too late with a bottle of wine over-slept the very first morning.  Instead, I woke up Monday morning to a text from my friend asking me if I would be interested in joining her CrossFit box.  It was a great deal and I was intrigued.  Maybe this was the next level that I was looking for in my weight training earlier this year.  I could work with trainers, lift heavy weights, and get stronger. Less than 12 hours later I was starting my first CrossFit on ramp class.

My new CrossFit experience started this week (yikes!) and I am paid up until mid December, at which time, I can decide if I will continue with it or move onto something new. I am committing to 5 days a week at 5:30 am.  It is going to be tough.  Really tough.  I am going to try to incorporate some easy leisure runs into my evenings for enjoyment, and a long run on the week-end to train for the San Antonio Rock 'N Roll Half in November.

So maybe I not having a fitness identity crisis after all.  I am a runner.  A runner who has a passion for hitting the pavement, for long runs, for slow runs, for fast runs, and for hills.  Yes, I said hills.  I will never again be that runner who logs 50+ miles a week, but just because I will not be running as much these days, it doesn't make me any less of a runner.  I just happen to be a runner who does other things.

I am a runner forever, even when I am not running.