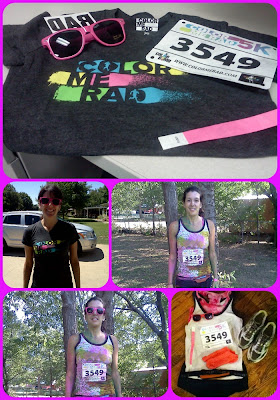 As tradition, the night before every race, I lay out my racing gear for the next morning and take a picture.  It is my "flat dummy".   I stole the idea was inspired by Moms Run This Town who do "Flat Mamas" of race gear on their Facebook page.

You may notice my flat dummy looks different than usual.  This is because this is not a usual race.  First of all, notice the absence of my GPS watch and my iPod.  I didn't want to risk getting my expensive gear ruined by the color bursts.  After all, this race is the true definition of a fun run, it is not even timed.  Since it is only a 5K, I knew I could survive the miles without music.


I picked out the oldest crappiest running gear I could find.  Old shorts that really don't fit me anymore (too big) and a cotton white tank that I wonder why I still even have because I haven't worn it since 2010.  I even dug out a pair of retired running shoes.  Doesn't everything look so clean?

Friday on my lunch break, I head over to the hotel in Fort Worth to pick up my race packet.  I expected this to be a quick in-and-out pick up, based on past race experiences.  I was wrong.  I line was wrapped through the hotel lobby out the front door into the 100 degree parking lot.  Did I mention it was over 100 degrees and I was wearing work clothes?  That first 15 minutes in line wasn't fun.  I did finally make it into the air conditioned lobby and continued to wait.  I wondered what was taking so long!  When I finally got to the front of the line, almost thirty minutes had passed.  I mentally noted posted a Facebook status update that it took me longer to pick up my packet that it would take me to actually run the race.  But I wasn't complaining (too much).  I really did the like the shirt and they gave me these super nerdy cool glasses. 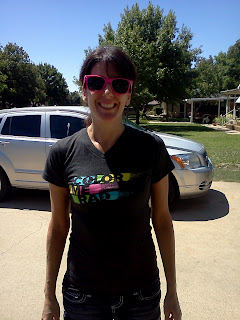 Based on my experience at packet pick up, I gave myself plenty of time the morning of the race to battle traffic, parking and bathrooms.  While I have only heard good things about the color races themselves, I have heard they were generally unorganized.  I was up at 6:30 and hit the road at 7:30 to make the 9am wave.  As I got closer to the race site, I started to worry that maybe I was in the wrong place, or on the wrong day.  There was NO traffic at all until right before you turned into the parking lot, and even that was only a five minute set back.  I easily parked, used the porta-potties, and had more than an hour to kill before start time.

Remember the 103 degree weather I was complaining about yesterday? Well this morning, I was down right cold in my shorts and tank!  It was chilly and windy.  I am pretty sure this is the first time I described Texas weather as cold since February.  I was, of course, grateful for the cold(er) weather because I knew it would make my run much easier.

After a long wait, as the start time approached, I made my way up to the start line to ensure I got a place in front in the first wave.  I had heard there were a lot of walkers in this run and I wanted to make sure I could stay ahead of the herds.  Then we were off!  I have to admit it was kind of freeing not to have the GPS watch.  I have a tendency to obsess over pace.  It was nice to just run what felt comfortable and not worry about time at all.  They didn't have any of the miles marked off, so I would have liked to know how far along I was while on the course, but since it was only 3 miles, that didn't drive me too crazy.

A few minutes in, I ran through the first color station.  Basically a bunch of people threw colored powder at me as I passed through.  I didn't get too colored my first go.  The second station was lined with people squirting colored water at me from hoses.  This time I got soaked and colored.  The water was cold!  I could have used some people with water hoses at my Too Hot To Handle 15K in July!  Today, at first, it just felt cold.  I repeatedly ran through the powder and colored water stations until I crossed the finish line.  I came out looking like this on the other side.

My unofficial time was 27 minutes assuming the race started exactly on time.  This was based on me pulling out my cell phone and looking at the time after I crossed the finish line.  Not my best  5K time, but still pretty good considering the color stations slow you down a tiny bit and the terrain changed as I progressed through the mostly flat course.  I know what you are thinking, these types of races are not about achieving a new PR, they are technically not even races since they are not timed.  The color runs are all about having fun!

I did have fun, you can't help but laugh and smile as you are getting color bombed, but these are the types of events that are definitely more fun when you do them with friends. I tried to meet up with some Facebook friends for after-race pictures, but it was just so crowded and my phone wasn't sending any texts, probably due to overload on the cell towers (or the fact that I have crappy phone service).

When I got home I washed my hair, threw that old shirt away and did a load of laundry. There is still color residue on my cell phone (color was all over my hands when I pulled it out to check the time), my SPI belt and probably on my car seats!

It was a fun run but I wish I had been able to experience it with some runner friends.  Who is with me for next time? There were a lot of walkers, so you definitely don't have to be a runner to participate!  That being said, I am ready to get back to some serious races where I can stress out and put too much pressure on myself again!   What about you?  Tell me where you ran your last color run?

I have never before bought the professional race photos, but these were so inexpensive compared to the regular rate, and just so fun, that I gave in to the temptation! 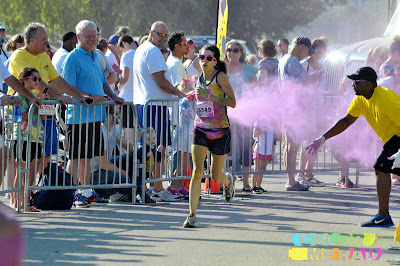 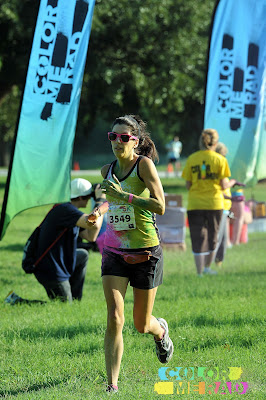 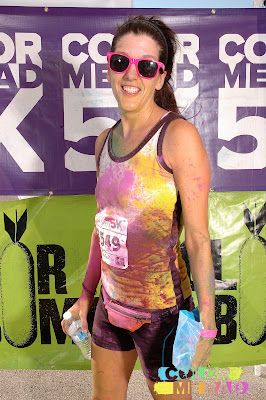 Want to run the Color Me Rad 5k in Dallas October 2013? Check out my blog post about it and if you act really fast, you can use the discount code I provided in the post.  Hope to see you there!

"LIKE" the Running for Dummies Blog page on Facebook
Follow me on Twitter @GeaLenders
Let's track each others workouts on Dailymile
See what I am up to on Pinterest
Add me to your circles on Google +
See what I am taking pictures of on Instragram @runningfordummies
http://www.runningfordummies.net

Posted by Unknown
Email ThisBlogThis!Share to TwitterShare to FacebookShare to Pinterest
Labels: 5k, Fort Worth, racing