Get to Know Me: 20 Random Facts About Your Favorite Dummy Blogger


2. When I was in elementary school, I was diagnosed with Petty Mal epilepsy. They told me I would never grow out of it. I have not taken medication for it since I was 11.  The doctors were wrong.

3. Growing up, I wanted to be a professional writer, I also wanted to name my first born child Monopoly.  I thought it was a pretty name. If I had a daughter or a pug, her name will be Zoe.  Put your money on the Pug.


4. I have a weird, slightly obsessive affection for monkeys. I have a stuffed monkey who I received as a birthday present when I was five that kind of started the whole thing. I named him George (original, I know). I have since have collected a rather large monkey collection.

5. I met my husband in a mall in Texas when I was 23. I was the manager of a store that sold ties and we had a tie hanging in the window with drum images on it. The tie drew drew him into the store and he asked me out on a date.  It's been nearly 15 years,  I've never seen him wear that drum tie.


6. When I was growing up in Pennsylvania, my dad jokingly called my sister "Jilly-Bean from Abilene" and as a joke would call me,  "Lea-Bean from Texas". I truly believe subconsciously that is what drove me to Texas. I never thought about the fact that Abilene was a real place (other than rhyming with Jilly-Bean) until I was driving to Texas from Arizona when I was moving here. When I reached Abilene, I pulled over my car to a phone booth (before cell-phones were so common) and called my dad “You will NEVER guess where I am calling you from!!” My dad still calls me Lea Bean (from Texas).

7. I used to be an all or nothing kind of person.  I either would run half marathons and live on protein shakes or I sleep late and eat cheese burgers.  There was no middle ground for me.  It took me a long time, but I am finally learning balance.

8. I never had to even think about diet or exercise before the age of 27. I ate and drank whatever I wanted, whenever I wanted, as often as I wanted and I wore a size six or smaller. I used to hate that I had to work so hard for something that used to be "free".  Now I can see the weight gain and the learning process was nothing more than a blessing.  I am only healthy today because the weight gain forced me clean up my eating habits and start exercising.  If I had been able to maintain a slim figure on a bad diet, I would probably still be feeding my body unhealthy processed junk foods. I would have never found the joy of running and working out.  I certainly wouldn't have this blog.  I probably would be walking around to this day as one of those skinny-fat unhealthy people.  I consider myself lucky for all that weight gain.

9. I am from Pittsburgh, so therefore a Steelers fan by genetics. I try to lose my Pittsburgh accent but it sneaks back every once in awhile (yinz, da stillers, dahn tahn, nebby, gum bands). I love Pittsburgh but had to leave because of the snow. GO STEELERS! If you ever go to Pittsburgh, find a Primanti's and Yinz go have a sandwich (consider it your cheat meal for the month).  You won't regret it.


10. I used to be deathly afraid of dogs. Growing up, I was even afraid of our family dog. It wasn't until Russ and I got our dog Candy (13 years ago or so) that I learned to love dogs. Sometimes when I run outside, random dogs follow me on my route. That would have paralyzed me 13 years ago.  Candy died this year and I miss her more than I even imagined that I would. 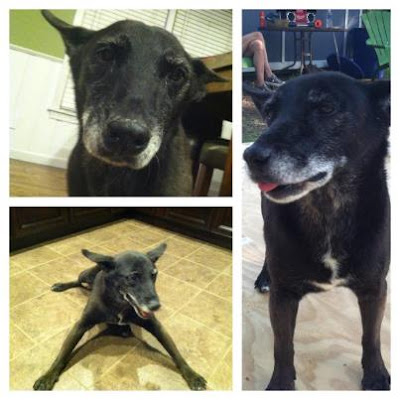 11.  I played the Clarinet in middle school, but quit when a heavy metal kid in my class started to pass me notes that he liked me.  That was the end of my musical career. Its a shame, I could have been HUGE! I own a guitar that I don't know how to play.  I have such a passion for music, I wish I could give back in some way.  I can't carry a tune in a bucket.  Thanks Dad for that joke 30 years ago.

12.  I am very photogenic. I am not bragging.  I think I look better in pictures than I do in real life.

13.  I, bar-none, have the worst singing voice ever. I still sing at the top of my lungs in front of my husband. I secretly wish I could sing so I could join a rock band.  I want to be Alison Mosshart.  If you dont know, Google it.


15.  I love fashion.  I met Tim Gunn (Make it Work!) and Isaac Mizrahi. I love them.  I am also a bargain hunter who loves to scour thrift stores for fashion finds.  Nothing beats a $3 designer dress that is only one dry-clean away from being new-to-me.


17. I have more friends that I have known longer than ten years than less.  Small talk with strangers makes me uncomfortable, unless we are talking about my blog, running or Jack White, then I could talk forever.  My friends can't get me to shut up.


18.  I got married on the beach in La Jolla, California. I had the most relaxed, non-stressed, enjoyable wedding imaginable. I strongly believe that making all your best friends dress up in matching pink taffeta and march behind you down the aisle is the worst thing you can do to the five or six people you love most in this world.

19.  I lived in New York City when I was 21. I moved there by myself for a job and didn't know a soul.  I survived.  I loved it, but I am glad it was something I did when I was young.  I don't think I could handle the crowds and cramped apartment these days.

20.  I would rather listen to music on vinyl than on MP3, except when I am running, because the record player would skip out there on the street. :)  I haven't bought a CD since since 2006 (and it was The White Stripes, Icky Thump, in case you were wondering).  I buy all my new music on vinyl and pray it comes with a free MP3 download for my runs and my car.

Those are 20 random facts about me.  What about you? Tell me about yourself and tag me in your post!