Saturday October 15th was the third race in a four race series called 'Fire & Ice' hosted by my favorite running store, Fort Worth Running Company. You should visit them (and buy stuff) on 7th street in Fort Worth, they are really awesome. These races were only $10 each and if you raced 3, the fourth one was free. $30 for 4 races? Unheard of. Today was the half marathon, 13.1 miles. Since it rained during the first 10K race in August and it rained the day before the 15K in September (causing super high humidity on race day), Jim Newsom of Fort Worth Running Company joked they would be changing the name of the race series from the Fire & Ice to Fire & Rain . With that being said, I was super grateful this morning for the gorgeous cool, clear, low humidity weather for today's half marathon.

This is me and Jessica after 13.1 miles. 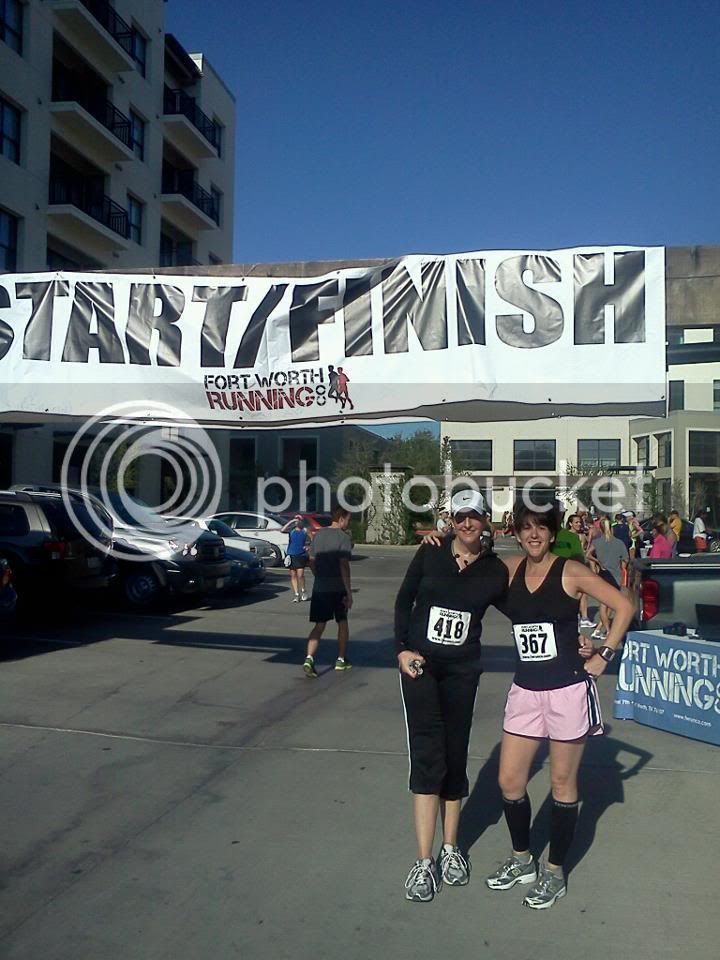 I woke up Friday morning with a weird pain in my right foot. I went to a concert Wednesday night and I think it somehow got injured there. I am old. Injuries can happen at anytime these days. I ran my regular 6 miles on Friday morning and my foot pain loosed up as I ran. I figured I would be fine for the race on Saturday.

Up early on Saturday morning. My BFF and running partner Jessica showed up at my house at 6:30 and we made it to Trinity Park a few minutes before the 7am start time. I did still have the pain in my foot, but based on Fridays experience I figured it would be fine after I got going.

It was the perfect weather. I wore shorts and a tank and was feeling chilly before the race started, but as soon as I warmed up on the trail it was absolutely the perfect temperature.

My race anxieties are finally starting to go away. I used to worry about finishing last, finishing last in my age group, finishing at all, bathroom issues (a real concern) and a million other things. My mind used to really get in the way of an enjoyable race start. I have found that the more races that I run successfully, the less anxiety I have.

The race started a few minutes after 7am and we were off. I was very focused on starting off slow. I learned in previous races that letting the adrenaline take over early in race and going too fast too early, caused major problems towards the end. Slow and low, that is the tempo. People were passing me all over the place and I had to put my ego aside and remember I was racing against myself, not others.

Jessica and I ran together and chatted for about the first 3 miles. She started getting a pain in her previously injured groin and wanted to slow down a bit so she could ensure she could finish. It is the smartest approach to a long run. Take it easy when you need to so that you can finish. That was my cue to go ahead. That was the moment when we were separated and I ran ahead.

I must say that I love running with my friend, I love our long conversations and our friendship, but a long quiet run on my own does amazing things for refreshing the soul. It is a time to think, clear my head, pray, sing along to the songs in the play list in my head. I love the quiet of a long run alone. NO cell phone, NO work, NO computer, NO stress, nothing but me and my thoughts. Its rejuvenating.

The first 6 miles were very easy along the Trinity river. The course was approx a 6.5 mile run with a turn around and a 6.5 mile return along the same path. It was about at mile 5 that I started to see the first people running towards me in the opposite direction on their way back to the finish line. Quick math in my non-math-enabled mind told me they were at about mile 7 while I was at 5.5, these were the people that would be winning this race.

The one thing I love about runners is the comradely. There was a built in cheering section amongst the other runners. I got thumbs up and good job encouragements all along the race, from people running in front of me and from those behind me. It is a good feeling and I couldn't help but pay it forward along the way.

After mile 6 is when I realized I had enough energy that I could pick up the pace a bit. My Garmin motivated me to stay between a 9:30-10:20 mile. I was moving pretty good without any trouble. The humidity was low, so my legs and lungs were free. I am slightly competitive, so I would spot a person up in front of me and decide I would overtake them. I would not sprint, but just move slightly faster so that over a period of time I would be able to pass. This was actually a game I played for most of the end of the race that kept my mind off those pesky things like time, miles and pace. I would spot someone and slowly work to pass them, one by one. I realized I might be obsessing when I was happy that I passed a man and realized after I went by that he was wearing cargo shorts, jogging with his dog, without a race #. This was just some guy out with his dog along the river and I was entirely too happy to pass him.

Towards the end of race it started to get strange for me. I couldn't see any other racers in front of me. I could fantasize that I was in first place, but the more obvious truth was the runners were so far in front of me that I couldn't even see them anymore. This is Trinity Park on a Saturday morning, so there were lots of runners on the trail who were not in the race. It became difficult to tell who was racing and who was not. It was pretty straight forward course, not too many opportunities to get lost or go the wrong way, but a couple of times I worried I would follow behind the wrong person and end up running back to their house. Another fear unfounded.

At mile 11, I looked up and was very pleasantly surprised to see my old boot camp trainer, Eliod Njubi pass me on the trail. He wasn't wearing a number and I can only assume from my knowledge of his ridiculously fast running speed, that he finished the 1/2 marathon long ago and decided to run to it again "for fun" (therefore finishing the 2nd time before I finished it once). This, of course, is speculation, he was probably just out for a jog. But just seeing him and exchanging hello's gave me a little boost of energy at the end of the race, when I needed it most.

The only trouble I had was at mile 12 because there was another BIG event at the park. The Alzheimer's Association Walk to End Alzheimer’s was starting as I was trying to pass through mile 12. There were hundreds of people with their children walking and crowding along the trail. So many that I had to slow down to almost a walk in order to navigate through the crowds. Another runner with our group was trying to clear the way by loudly stating, "Clear the way, another event going on today, runners coming through", which I greatly appreciated but the Alzheimer people seemed irritated that they had to step aside for us. I met up with a couple other runners at this point and we pushed through the crowds the best we could along the last half mile. Once I broke through, I decided to finish as strong as I could. I picked up the pace and crossed the finish line at 2 hours 11 minutes. A half marathon PR for me.

It really was the best race I have had. Compared to El Schorcho in July at Midnight in high humidity, this was a breeze. I am feeling great today but my foot is really hurting. I knew I had a pain before the race and maybe running 13.1 miles on an injured foot wasn't the best idea. I have it wrapped up today and I soaked it in Epsom salt. I'm hoping it will heal in a few days and not mess up my runs next week.

So, once again I want to really thank the fine folks at Fort Worth Running Company for making these types of affordable fun races possible. As long as you offer them, I will run them.

I'll be in the store early next week to purchase my 13.1 sticker to put on the bumper of my car. Whats the point of running a half marathon, if you cant brag about it to everyone else on the road? :)

Next up: Taking a step backwards in miles with a 10 mile race on November 5th.

Are you following my blog? Simply click the blue 'Join this site' button to the left (you may have to scroll down from the top). Thanks, as always, for your support. Lea-Bean
Posted by Unknown
Email ThisBlogThis!Share to TwitterShare to FacebookShare to Pinterest
Labels: Fort Worth, Half Marathon, racing, running