I seriously love being a rock 'n' blogger for the rock 'n' roll marathon series. It is such an honor to run their fun races, share my experiences and offer my friends and readers (same thing, right?) a discount code on half marathon and marathon distances in the 2016 series. You can use code LEAGENDERS to save $15 off most marathon and half marathon distances in 2016. Vegas, anyone? They pay for my races, but all opinions are my own and my opinion is that they totally rock.

The rock 'n' roll marathon is having a really fun virtual race series with medals going on this summer! If you don't live in any of their race cities or if you are looking for an affordable way to run a race, the virtual race series Making a Band, is perfect for you!

A virtual run is a run that you complete in your own town and on your own terms while connecting with others online. It can be done on the streets in your neighborhood, on a track, on the trails, on a treadmill or anywhere else you can dream up. You just put in the miles.

It's a great way to stay motivated throughout the summer. You can download a race bib and even earn medals. Use the hashtag #rnrvirtualrun to connect with the other runners!

The races are $29 each and you get an awesome medal for each one and a bonus medal if you complete all three.

The first virtual race of the summer was the Guitar Solo and I was excited to run it to earn the guitar solo medal. Up next is the drum solo medal and this one has a special place in my heart because my husband is a rock drummer! 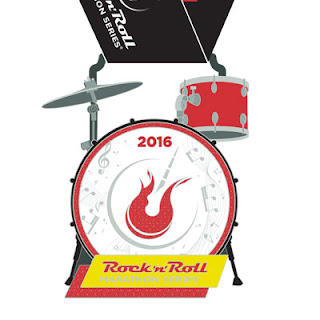 I was traveling to Los Angeles last week for BlogFest and the IDEA World fitness convention when I realized I had only a few more day to get in my virtual "guitar solo" run. Good thing my fellow rock 'n' bloggers Mat.Miles.Medals and Train with Bain were there too! We decided to run the virtual race on the treadmill at the hotel together! How fun is that? We each put in 3.1 miles at our own pace and the most fun part was filming our air guitar solo at the end.


It's pretty apparent from the video that I have never ever played a guitar, held a guitar or probably even watched a guitar player in action, because....what the heck am I doing with my hand holding the neck? lol. Clearly, that is not how it's done. However, it's all about the fun and we definitely had some laughs while running and filming the video.

You can sign up too to run a virtual race and earn the awesome rock 'n' roll bling!