Today's writing prompt for the Blogember blog every day in November challenge is to write about my first job. I hope that you are still hanging in there with me, eleven days to go!


Technically speaking, my very first job ever was working for tips at the church where my grandmother played bingo. The old people (they probably weren't that old) would tell me what they wanted from the snack stand and I would run and get it for them. It was my first and only server job and I worked purely on tips. Back then you could still smoke indoors, so I would come home smelling like grease, sweat and cigarettes, but I really liked it. It was my first taste of working hard and earning my own money.

I did some babysitting to earn money, but never really enjoyed that. I was too much of a worrier! It was so much responsibility to entertain a kid, care for them, feed them...then what if there was a burglar, or a fire, or an alien invasion? My little brain would come up with every worse case scenario. Then there was that summer that I baby sat a little girl every weekday while her mom was at work. She locked her self in the bathroom with a pair of scissors and cut off all her long hair. Maybe this is why I never had kids of my own.


My first real job, that I received a pay check and paid taxes, was a walk-up-to-the-window Dairy Queen. We only served ice cream, no fast food. I am thankful for my teen-aged metabolism because we would eat ice cream during our entire shift, and I am sure I never gained a pound. I wish I had a picture of myself in my Dairy Queen uniform, but I have the next best thing: Me in my awful prom dress and my sister in her uniform. My mom's friend owns the DQ so at one time or another all my siblings worked there. I used to look at this picture and think it was funny that I looked pretty and my sister was covered in ice cream after her DQ shift, now I realize that my dress was ridiculous and she looks like the normal one. 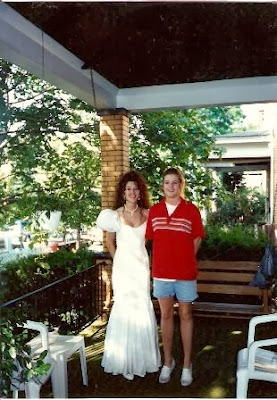 I went on to work some retail jobs at the mall at Chess King and Merry-Go-Round. Oh gosh, I am old. These early jobs were the ones that taught me work ethic and launched what ultimately became my retail merchandising/marketing career.

What was your first job?