Why I Abandoned My Paleo 30 Challenge After 9 Days 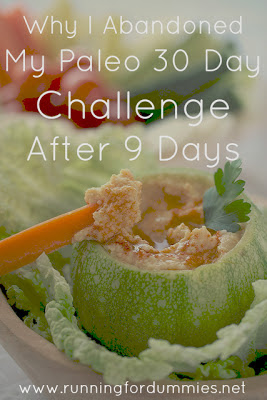 One of my July goals was to eat Paleo for 30 days.  Here is why I abandoned my Go Paleo 30 day challenge after only 9 days.

It had nothing to do with my love of peanut butter, hummus, and wine. Well, almost nothing.
I loved the idea of the Paleo diet. Eat as our ancestors ate, the hunters and gatherers. I’m no expert, but from what I gathered (no pun intended) the bones (I’m on a roll!) of the diet is you only eat meat, fruit, vegetables, nuts and seeds. I already try to eat whole natural foods most of the time. This is pretty much my current diet anyway, sans my weekly indulgence meals. I thought it would be a super easy transition.
As I read into it more, I discovered that there were a couple of foods on the Paleo naughty list that were a regular part of my weekly diet: 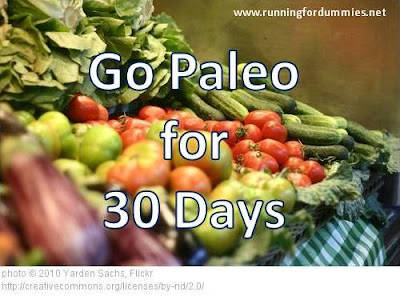 1. Peanut butter: I consume crunchy all-natural peanut butter at least three times a day and often cite it as my favorite food.
2. Chick peas: I love hummus and go on a weekly outing to a local Mediterranean lunch buffet to load up on the best hummus I have ever had.  Weekly.  Without fail.   Sometimes twice weekly.
3. Edamame:  Not only is this my go-to healthy dish at Chinese restaurants, I buy the single servings at the grocery store and eat as a snack at work.
4. Corn: Specifically, corn on the cob. I love a good corn on the cob off the grill with my steak.  It is one of those things we eat nearly every week-end during the summer months.

Then there were a couple of foods that I enjoy in moderation, that I don’t consider a cheat or an indulgence food, I just make sure I don’t go overboard. I usually consume these once or twice a week, but Paleo says no-no:

1. 100% whole wheat bread or wraps: This girl likes to eat her turkey burger on a bun once in a while.
2. Cheese: Proper serving sizes, used in moderation never hurt me.
3. Wine:  I like to enjoy a glass of wine or three.

These are all things that I consider to be healthy, that I really enjoy. I’m still not sure I understand the reasoning behind why I can’t have these foods on the Paleo diet.  I read about it, but the reasons aren’t resonating with me. Besides cutting the above foods out, my diet would pretty much stay exactly the same.  It was only for 30 days (plus I was still allowing for indulgence meals where I didn’t follow any rules). I could go without peanut butter and hummus for 30 days, right? Right?

I admit that I started out a little skeptical. I am not trying to lose any weight, it fact, I am trying to gain (muscle).  I already eat a clean diet 90% of the time.  How much difference would I feel or see by removing just a couple of foods from my diet, especially when weight loss isn’t the desired effect? How would I explain to my lunch friends why I was skipping out on the best hummus on the planet all of a sudden?  It was just an experiment, just to see the result, if any? I understand that when someone is eating unhealthy and then switches to the Paleo diet, there is a dramatic difference in weight, in mood, and  in energy.  What if my weight, mood & energy are already where I like them?  When I asked myself what I thought I would achieve, or even what I was hoping to achieve, I couldn’t answer that question. I think my negative mindset coupled with my lack of pinpointing my desired results were the first two downfalls of my Paleo challenge.

Then there was the hummus thing.

Week one, day one:  I immediately bought myself a jar of almond butter to replace my regular peanut butter.  Almond butter has almost the exactly same nutrition facts as peanut butter, it just doesn’t have peanuts, therefore it is Paleo friendly.  It doesn’t taste quite as good as peanut butter, and it is more expensive, but it was a suitable replacement.  I could live with this, knowing it was just temporary.

Week one, day two: The skipped the slice of cheese on my turkey pattie.  Success!

Week one, day three: It happened to be July 4th. Hubby brought home corn on the cob for the grill that night. I had to remind him that I couldn’t eat corn on my new Paleo experiment, again without really being able to give him  a good reason why.  He was a trooper and ate both cobs himself. But then, I wanted a glass of wine on the patio on this grilling holiday.  First fail.

Week one, day five: It was my weekly outing to my favorite hummus buffet.  I couldn’t stop myself.  I always easily skip over the pita bread, the potatoes and the rice.  No problem, I usually do that anyway!  I loaded my plate with chicken kabobs, vegetables, roasted cauliflower, salad and… hummus.  I had to do it.  I swear this is the best hummus on the planet (have I mentioned that yet?).   The hummus was staring up at me from the buffet table literally asking me why I was doing this Paleo thing in the first place. OK, not literally.

I made it through the first week-end just fine, considering this is the time I have my indulgence meals anyway, and I didn’t have to follow any rules at all.  I had a chicken fajita taco with beans on a  flour tortilla, tortilla chips, queso and a beer!  Take that Paleo! Nom. Nom. Nom.

I tried to evaluate any effectiveness after my first week. Weight: same (good).  Mood: same (good).  Energy same (good).   I realize it was only the first week and I slipped up a couple of times (plus my indulgence meal) but was this making any difference at all? Was I ready to give up?  Was I not giving it enough of a chance?

I decided to call it quits on Monday of the second week, when my regular lunch friend suggested the hummus restaurant again (I told you it was a weekly outing).  I started to try to explain why I shouldn’t go. I tested my will-power at the buffet last week and failed when I ate the hummus. Again, I struggled to explain why I was doing this, what I was hoping to gain, and why I was further limiting my already healthy diet for no apparent reason. It was especially hard to explain to someone who already thinks my regular diet is over-the-top strict. I already couldn’t explain it to myself, when I tried to explain it to another person out loud, I realized right then and there I was putting undue pressure on myself.  I could eat a chick pea if I wanted to. Why would I limit myself from my beloved peanut butter, when eating peanut butter never caused any determent to my health and fitness goals? What did peanut butter ever do to me?

I ultimately decided my general happiness and enjoyment of life was more important than some 30 day challenge. If peanut butter and hummus and an occasional glass of red wine bring me joy, there was no good reason to limit that joy.  We are talking about peanut butter here people, not drugs, smoking or excessive drinking!

While I still love the general idea of the Paleo diet, and strongly believe most people would benefit from eating only whole natural foods,  it is a little too restricting for me personally. I don’t see the need to cut out certain healthy foods from my diet, especially when I can’t fully understand the reasons why. I certainly don't have anything against the people who follow the diet and love it! I gave it a shot, and while I wasn’t successful, I wouldn’t call it a failure either. I would call it a learning experience. I learned I can't live without peanut butter and hummus and those cave men were really missing out.

I saw this over on Pinterest, and I think this says it best: