I ran the Too Hot to Handle 15K at White Rock Lake in Dallas, TX this morning.  I was a little worried that it would indeed be, too hot to handle, but the weather cooperated for the most part.  The morning started off cool enough and any heat that was felt as the race went on was nicely thwarted by the shade,  the sprinklers they had set up along the course, and the cool wet towels they were handing out.  For me, if never got uncomfortably hot and that is saying a lot for a 15K smack dab in the middle of July, in Texas. 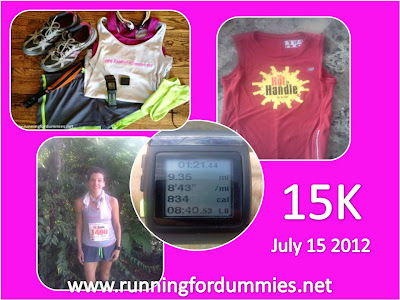 I was a little worried about this race.  Not surprising really, I have a tendency to put too much pressure on myself and worry about things that likely will never happen.  I used to worry about coming in very last place in my age group, having to go to the bathroom in the middle of a run, if it would rain, if it would be too hot, or too cold, or too windy.  As I gained more experience racing, I've learned these sort of worries are almost always unfounded.  I still usually find something to worry about.


This week on Monday, kind of out of the blue, I decided it would be a good time to start the Insanity program.  If you have not heard of it, it is a super intense cardio and strength training 60 day program.  It is called Insanity for a reason, it is kind of insane.  I have only done the first week, I hear it gets more insane as the program progresses.  After three days of this my legs were feeling the pressure of the change in routine.  There are a lot of plyometrics (i.e. jumping) and my calves were sore & tight most of the week.  I started to wonder why I thought it would be a good idea to begin a new intense program the same week I had signed up to run a 15K.  By Wednesday evening I was itching to run, since I haven't hit the streets for a regular run since I started Insanity.  I got out there and it was the hardest, slowest run I have had in months.  My legs were tired, really tired.  I felt like I was trying to move two lead poles instead of legs.  It was terrible.  Now I had something to worry about.  Hubby suggested maybe I take the rest of the week off of Insanity to recover so that I would be ready to race.  I didn't want to, I want to do the program exactly as prescribed.  After all, reality check, this wasn't the Olympics, I wasn't under any real pressure to perform well.  What if I got to the race on Sunday and I ran slower than usual?  What if my legs were tired? The worst case scenario is the run would be hard, but I would eventually finish, right?  Who cares if I didn't PR.  Even if I had to walk or I had a bad race, I would get over it within 48 hours.  I decided to power through with Insanity for the rest of the week.  I was still a little worried.

The night before I laid out my gear for the morning:

There wasn't really a packet pick-up location that was convenient to my home, so I opted to pick up my race number at the race site, which meant I had to get there about an hour early to make sure I had time before the race started to take care of this business, you never really know how the lines will be, not to mention parking and porta-potties.  The race site was about a 45 minute drive from home, this meant I had to get up a 5am on a Sunday.  Fun!

I managed not to get lost (a small miracle in itself even with Google maps and GPS) and parking was a breeze.  I was off to a good start.  I picked up my race bib and the only disadvantage to waiting until race day to pick up my packet was that they were out of my size shirt.  I had to choose between a men's small and a women's extra small.  I opted for the women's.  It is a pretty cute shirt.  I am always happy when race shirts are technical sleeveless shirts that I will actually wear to run.  The last thing I need is another over-sized cotton t-shirt.  This one was near perfect.
I lined up at the start and right at 7:30am we were off and running.  The 15K and the 5K races started at the same time, so it was near impossible to run around the crowds of people.  I just hung back and patiently waited for the crowds to disperse.  I have a tendency to let the adrenaline take over in the beginning of a race and run too fast.  The crowds were keeping me in check, I was running well below comfortable pace.  After about a half mile, the 5K runners took a turn and the 15K course opened up.  I started to get into my groove, constantly reminding myself to keep my pace under control.  My goal was to run a consistent comfortable pace.  If I pushed it too much in the beginning I knew I would be miserable by the end of the 9.3 miles.  Slow and low, that is the tempo.

My legs were feeling good, I was feeling good.  Fears, once again, unfounded.  The scenery was beautiful.  I have lived in the Dallas/Fort Worth area now for about 15 years and I realized today that I have never run at White Rock Lake.   It is a shame really, it is a beautiful park, a wonderful place to run.   I was filling my head with positive thoughts about how much I love to race, how much I love to run, how thankful I am for the ability to run, how nicely my legs were moving and how effortless it felt.  I found if I tell myself over and over how easy it is, it really does start to seem easy.  The power of positive thinking, it really works.

I've been saying in my race recaps for about a year now that I need to slow down my pace during races.  I always would get so pumped up on adrenaline (and caffeine) and run as fast as my little legs would take me.  I always ran races much faster than my training runs.  I would end up feeling completely miserable during the last few miles of a race, especially during half marathons.  I knew better!  You know what they say, knowledge is nothing without execution?  I knew I should be slowing down, I just never could do it.   This time was different.  I kept an eye on my GPS watch and if my pace would get too fast, I would bring it back down.  I'm learning now that the key is to do speed work and strength training to get faster during training in order to improve my comfortable pace, so that when I run races, my comfortable pace is naturally faster.  That was this dummies A-HA moment.

The time and miles flew by.  I was very thankful for the sprinklers, wet towels and water stations set up along the course, they really went a long way in keeping me cool.  After the ninth mile, as I rounded the corner to the finish, a few people standing at the curb were offering up hi-fives, which gave me a little extra pump at the end when I needed it.  As soon as I spotted the finish, I picked up the pace to finish strong.

I felt great.  I didn't feel like I wanted to die.  I wasn't miserable at the end and I managed to finish with a respectable time.  Keeping the pace slow was the key to a very enjoyable race, every last mile!  This was a 15k PR for me.  It was only the second 15k I have ever run.  The last one was about a year ago and I finished in 1:39.  I was 18 minutes faster than I was a year ago!  I mostly attribute my improved speed to strength training.  It took this dummy too long to figure out that in order to be a better, faster runner, strength training was a requirement.

As it turned out, despite my needless worrying, my legs didn't let me down and it wasn't too hot to handle after all.  I handled it.

Ways to (legally) stalk me (and I will stalk you right back):
"LIKE" the Running for Dummies Blog page on Facebook
Follow me on Twitter @GeaLenders
Let's track each others workouts on Dailymile
See what I am up to on Pinterest
http://www.runningfordummies.net/