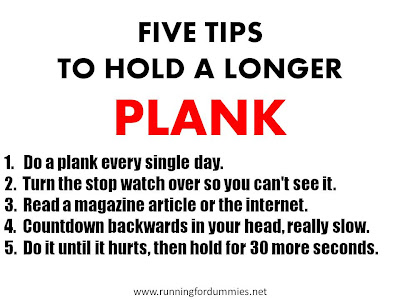 Have you heard of this new social media outlet called Twitter? I hear it is the latest rage.  I have had a Twitter account for a couple of years but I haven't starting using it on a regular basis until  recently.  Maybe I'm behind the times.  I'm pretty sure my 98 year old grandmother has a Twitter account. Maybe not.  I started having fun with Twitter when I heard about #plankaday.  I was already doing a plank every day before I learned I could brag about my plank times all over the internet. I went from struggling to hold a one minute plank to holding over seven continuous minutes. I thought I would share my plank progression over the last few months to show you how your plank times can build slowly over time.  The secret is to do it every single day.  My abs are strong and I actually have ab definition that I credit to clean eating, regular work-outs and of course, my plank a day. 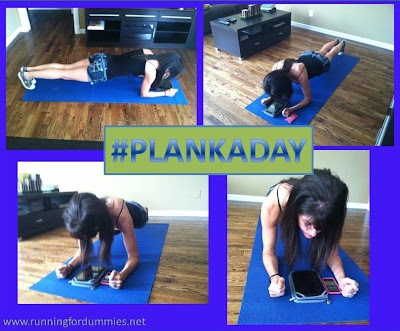 1.  Do a plank Every. Single. Day.
2.  Turn the stopwatch over so you can't see it.  Don't look at the timer until you physically are ready to drop.  I know when I am ready to drop when my thighs start shaking.
3.  Find something to distract your brain.  I sometimes browse Facebook on my Kindle Fire or read a magazine article during the first part of my plank.  This really helps pass the first couple of minutes.  By the end when it starts to get hard, I have to stop reading and focus because my whole body is shaking.
4. Towards the end countdown backwards in your head, really slow.  I start at 60 and count down slowly to one.  This is another way to refocus your brain and it usually kills about two more minutes.
5.  Do it until it hurts, then push yourself to hold for at least 15-30 more seconds.  Sometimes I drop in a pool of my own sweat.  It is a beautiful thing.


So let's hear it, who has got me beat? What is your plank record?


What is your best plank time? Running with Ollie has a plank leader board of the top 20 plank times.  Get your plank in today and submit your time to be added to the board.