Five Things You are Probably Paying Too Much For 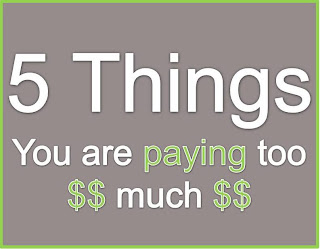 There are certain things in life that once you become a self-supporting adult, are given life expenses. A mortgage or rent is one of those expenses. Want a roof over your head? You're probably going to have to pay someone for that luxury. Then, there is the electric company. You are always going to have to pay that bill if you want a way to keep your milk from going sour and you like your air to be conditioned. Then, of course, there is insurance, of all kinds. It's the right thing to do. With all that being said, there are at least five things I can think off the top of my head that most people pay too much for, without even thinking about it, writing it off as a part of life.

Five Things in which you are probably paying too much:

1. Television: How much do you pay for 200+channels? I used to pay $75 a month without blinking an eye, and that didn't even include premium movie channels. It's a given, right? I have a good job, I can afford this "luxury". After an argument with a customer service rep at DirecTV with whom the irony of their job title was completely lost, I pulled the plug on satellite TV. I did this out of frustration more than any notion of saving money. I went to Wal-mart and bought a TV antenna for $20 (not the rabbit ears you remember from the 80's). Instantly, I had crystal clear access to all the local channels, plus a few extra channels that were unexpected. There is a channel called Antenna TV, which plays reruns of old sitcoms and even a channel that has home remodeling and design shows similar to those seen on HDTV. I subscribed to Netflix's live streaming service for $8.99 a month for instant access to past seasons of tons of television series, reality shows and older movies for those times that there was "nothing on" network TV. I learned VERY quickly that having less TV channels did not lessen my quality of life. Free TV. It's a beautiful thing.

2. Cell Phone Service: Someone tell me, just when did it become the norm to pay over $100 a month for cell phone service for one phone? Remember the good old days, when your cell phone was just a phone? When you just made calls? Those were the days, before the smart phone, but that doesn't sound very smart. I don't know how they did it, how they slowly over time tricked me into thinking $100 a month was OK for this service.  Then one day when I was paying my cell phone bill of over $200 for 2 people. I thought, "This is crazy, this is like a car payment!" My first point of action, I canceled my smart phone and downgraded back to a dumb phone. You know, one that just makes calls and sends texts. I was saving the data plan, but honestly I missed my smart phone. I had grown addicted accustomed to the convenience of it. Unlike my TV experience, I really did miss my smart phone. There had to be another way. Metro PCS was my savior from outrageous cell phone bills. Now I have an android powered smart phone and it's only $60 bucks a month for unlimited everything on the Sprint network.  I don't understand how one company can charge more than $100 for something that another company charges half, but I don't need to understand. I am going with half price.

3. Car Payments: I remember someone saying to me once a long time ago, "A car payment is just part of life. If you want to drive a decent car, you have to have a car payment". I remembering agreeing with them. Its amazing how you change. What? You don't have 30K sitting in your bank account to pay cash for your new car? Guess what? You can't afford a new car. People seem to think if the car payment works within their monthly budget, then they can afford the car. I don't believe this to be true. I can afford to pay $500 for a car payment. I choose not to afford the interest charges over five years for a car that is decreasing in value every time I drive it. I am not going to say that I never borrow money for a car. In fact, I am currently in the middle of a three year loan. I bought a used car, put a big down payment and chose a short term loan. I plan to use all that money that I am saving on TV and cell phones to pay off the loan faster than three years. When I get to the blessed moment when have the title in my hand, I will drive that car for as many years as it will allow. We paid off hubbies truck in a year an a half and he will drive it until the wheels fall off, hopefully well into the year 2015.

4. Credit Cards: In this day and age, I would hope that everyone would have stopped credit card use for anything but emergencies (a sale at Nordstorm does not qualify as an emergency). However, I understand because we've done it too. We spent too much and got us in a little over our heads. $100 here and there added up to thousands in debt. Thousands in debt is not fun. I know now, the interest and monthly payments will kill you and your month budget. If you don't have the cash, don't buy it. Period. It's so easy, but lost on so many. Work to pay off your existing debt without adding any additional and sooner or later you will be debt free. Debt free = free.

5. Shopping: I LOVE to shop. I love clothes and jewelry and shoes and home accessories and handbags and did I say jewelry yet? Shopping doesn't have to break the bank. Check out any thrift stores lately? My $15 Marc Jacobs skirt find might just be my prized thrift store possession. Not into buying used clothes? It's only one dry cleaning away from being new-to-you. But, there are other options. You don't have to shop at Nordstorm or Saks to be in style. Stores like Ross, TJMaxx and Marshall's have name brand clothing for considerably less than department stores. And who needs name brands? After nearly two decades working in the apparel industry, one thing I learned is that a label is only a label. Many times the name brand item and the knock off are being produced in the same factory, only with different labels. I can't remember the last time I bought something at Macy's or full price from a mall store. My theory is that if you have good taste, you can shop anywhere. You can find a cute cami at Wal-mart or a fashion forward skirt at Target. Heck, I wouldn't be opposed to buying a piece at Dollar General if was cute. If you know how to put clothes together, the WHERE you buy isn't as important as the WHAT you buy.

I'm not perfect when it comes to spending money. We spend entirely too much money eating out and are working on improving that. I am admittedly very frugal but I like to have nice things, to enjoy life and to look nice. I believe you can find ways to spend less and still live a full and modern life.
Posted by Unknown
Email ThisBlogThis!Share to TwitterShare to FacebookShare to Pinterest